Your teenager is at that age where they're starting to show an interest in photography. But you're not sure if they're ready for a DSLR just yet. Check out our list of the best cameras for teenagers, perfect for those who are just starting out in photography.

What is a good beginner camera for a teenager?

First, let`s decide on the features that are important for a beginner photographer. A good beginner camera should be:

Based on these criteria, we`ve compiled a list of what we think are the best cameras for teenagers. Cameras for teens should be easy to use, have good image quality, and be reasonably priced.

There are also some features that cameras for beginners and teens should exclude. For instance, a camera with a lot of megapixels might be overwhelming for a beginner. A camera with too many buttons and settings can also be confusing.

The best cameras for teenagers should have features that the user can grow into. For example, a teen might not need 4K video recording right away, but it`s a feature they can use as their skills develop.

What cameras for teens are the best?

This camera features 24.2 megapixels, a full HD 1080p video recording, and a guide mode that walks the user through the various settings and features. It also has a variety of scene modes that are perfect for those just starting out in photography. The D3400 is a great choice for a teenager who is interested in photography and wants to learn more about the art form.

The Nikon D3400 with the 18-55mm f/3.5-5.6G VR lens is a fantastic buy for around $500. It has won numerous honors as the best dSLR for newcomers, making it an ideal camera for a kid as well. It's easy to use with a user-friendly guide mode, and it has great image quality for its price range. If your teenager is interested in photography, the Nikon D3400 should be at the top of your list.

The battery life on the Nikon D3400 is also excellent, with a capacity of 1,064 shots per charge (or about 400 more than the D7200) and can last for up to ten days shooting. It means that all the teens will be able to capture their adventures without having to worry about running out of power.

The SnapBridge technology within the Nikon D3400 makes it simple for a teenager to move images from the camera to a phone. You may also enable an auto-setting that causes smaller 2-megapixel versions of your photos to appear on your phone without you having to fiddle with your camera after taking them.

With all those advantages, the Nikon D3400 is one of the best cameras for a teenager.

This Canon camera has many features that will be beneficial for a teen who wants to get into photography. With an 18-55mm lens, this camera will give the user the ability to zoom in and out as well as capture wide angles. The Canon EOS Rebel T5i also has a vari-angle touch screen LCD which will make it easy to take pictures at different angles.

You still get a great camera for a low price with the Canon EOS Rebel T5i with 18-55mm f/3.5-5.6 IS STM lens. When looking into this camera, be aware of the many variants, including one without the 'i.' this is the version we advocate. This camera has a lot of features that will be great for a teen who wants to get into photography.

The articulated LCD display makes it simple to shoot videos from low to high, and the 180-degree flip allows for self photos or narrative-to-camera recordings. This is ideal for your teen's YouTube aspirations! The addition of the STM motor to this model also gives near-silent focus during movie recording, which is a great feature if your teen wants to vlog without annoying background noise.

This camera for teens has some disadvantages as:

Overall, the Canon EOS Rebel T5i with 18-55mm f/3.5-5.6 IS STM lens is a great camera for teens who want to get into photography. The Canon EOS Rebel T5i, on the other hand, takes excellent photos and is unrivaled at this price for a video-recording camera. This is the camera for you if you're looking for a teen who likes to play around with both still and motion picture formats.

This camera is a great choice for teens who are just getting into photography. It’s small and lightweight, making it easy to carry around, and it has a flip-screen LCD that’s perfect for taking selfies. It also has an aperture priority mode, which is great for creative control.

Despite the fact that we've written frequently about Fuji lenses, we're firm believers in using only one camera lens. The Fujifilm X70 makes it simple; it comes with an 18.5mm (28mm equivalent) f/2.8 wide-angle lens that performs well and is ideal for almost every purpose. Fujifilm has many advantages like in-camera film simulations, great ergonomics, and a thriving ecosystem of X-series cameras and lenses.

The X70 is the first Fujifilm camera without a viewfinder, which may be seen as a con for purists. However, in today's smartphone-centric world, being able to look at a big LCD screen to capture an image is usually considered normal. As a camera for teens, this one has a lot going for it.

Among other technical characteristics, the Fujifilm X70 has a 16.3-megapixel APS-C CMOS sensor and a fast Fujinon 18.5mm f/2.8 lens. It's a great little package, especially since it's priced below $700. Fujifilm is really known for providing excellent picture quality, and its X-Series cameras are no exception. Despite the fact that the Fujifilm X70 is the entry-level mirrorless in the line, it delivers comparable outstanding image quality to other, more expensive X-series models.

The main competitors for the Fujifilm X70 are the Ricoh GR II and the Sony Cyber-shot DSC-RX100 III. The Ricoh is a bit cheaper but doesn't have a viewfinder or articulated LCD, while the Sony is more expensive but comes with a Zeiss 24-70mm f/1.8-2.8 lens.

This camera from Sony is a great option for teens. It's small and lightweight, making it easy to carry around, and it has a lot of features that allow you to take great photos and videos. The 16-50mm lens is also a great all-purpose lens that will let you capture a variety of different types of images.

The Sony a5100 offers the greatest features of other higher-priced Alpha cameras for a fraction of the price, making it the best buy in the category. You'll see that the price is lower than that of the Fujifilm mirrorless camera, and the feature set is considerably more comprehensive. This means that the a5100 is the best choice for teens who are just getting into photography and want to experiment with a lot of different features.

What's in the box: Sony Alpha a5100 Body with E PZ 16-50mm f/3.5-5.6 OSS Lens - Black, rechargeable battery (NP-FW50), AC adapter (AC-UB10), micro USB cable, neck strap, manual. The Sony a5100 is a great camera for teens who want to get into photography. It's small and lightweight, making it easy to carry around, and it has a lot of features that allow you to take great photos and videos. The 16-50mm lens is also a great all-purpose lens that will let you capture a variety of different types of images.

The main competitors for the Sony a5100 are the Canon EOS Rebel T6i and the Nikon D5500. The Canon is a bit more expensive but comes with a better lens, while the Nikon is cheaper but doesn't have as many features. The Sony a5100's autofocus performance is another area where it outperforms its competitors. The Sony a5100 uses a class-leading 179-point hybrid AF system that covers almost the entire frame and can lock on to even the fastest moving subject. It means that you'll be able to capture great photos and videos of even the most active teens.

The only disadvantage of the Sony a5100 is that it doesn't have a viewfinder. However, in today's smartphone-centric world, being able to look at a big LCD screen to capture an image is usually considered normal.

For teens, digital pocket cameras are an excellent option since they allow them to make real-time physical memories – something their phones can't do. They're also a fantastic choice for holidays or school excursions when bringing an expensive digital camera is inconvenient. 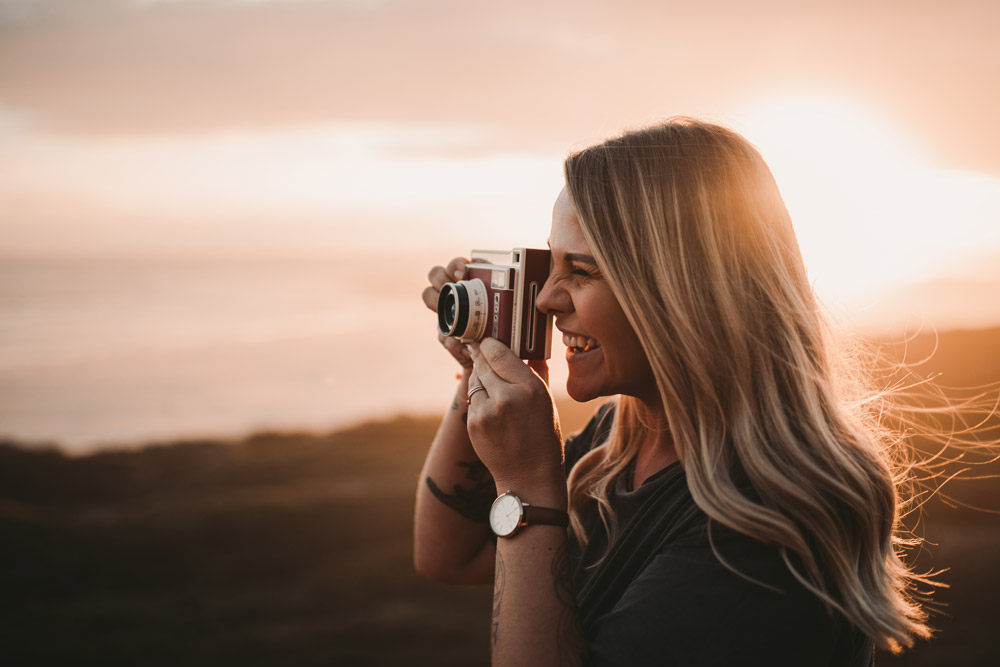 Instant cameras allow you to print photos on the spot, which is perfect for spur-of-the-moment photo ops. They're also a unique way to share physical copies of your photos with friends and family, something that's becoming increasingly rare in today's digital world. So, if you're looking for a camera that will let your teenager snap away to their heart's content, an instant camera is the way to go!

What camera do Instagrammers use?

Teens and Instagram go together like peanut butter and jelly. And, just like PB&J, there are a lot of different ways to enjoy them. Whether your teen is into fashion, photography, or just sharing their everyday life with friends, they'll need a great camera to get the most out of Instagram.

As for Instagram, there are several requirements for the best camera. First, it needs to be able to take high-quality photos and videos. Second, it should be easy to use and have a variety of features that allow you to get creative with your posts. Finally, it should be compact and portable so that you can take it with you wherever you go.

All the cameras for beginners that we've mentioned so far would be great for taking Instagram-worthy photos and videos. However, if you're looking for a camera that ticks all the boxes, our top pick is the Sony a5100. It's a great all-around camera that offers excellent photo and video quality, a variety of features, and a compact design.

Is Canon or Nikon better for beginners?

In most cases, Nikon is superior for novices. Its settings and lingo are more straightforward to comprehend. Nikon has better beginner cameras at a lower cost than Canon. In contrast, Canon's entry-level cameras are more expensive but have more advanced features. But why?

Well, let`s start with an analogy. Nikon is like Apple products – they just work, and they`re very user-friendly. Canon, on the other hand, is more like Android – a little more complicated but offers more features and customization options. There are many features that both brands offer, such as burst mode and RAW support. But Nikon has an advantage when it comes to ease of use.

When choosing between Canon and Nikon, also think about what kind of camera you want to buy. If you`re looking for a DSLR to learn photography, then Canon is probably the better choice. But if you just want a simple point-and-shoot to document your life, then Nikon might be a better option. So, if you`re just starting out, we recommend going with Nikon. But if you want a few more bells and whistles, go with Canon.